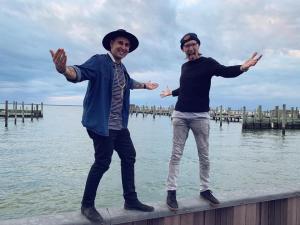 JImmy Merchant and Bryan Hansen are fighting back!

We were hired to write a song for a family. After writing it, we didn't get paid. Rather than just letting it go, we started a business that creates amazing memories for people. ”
— Bryan Hansen, SongFer LLC Co-Founder

ASBURY PARK, NJ, USA, June 15, 2021 /EINPresswire.com/ — For Immediate Release, Asbury Park NJ: As if New Jersey indie artists don’t already have it tough enough these days trying to make a living …. scammers are targeting them with a fury. Popular performers Bryan Hansen and Jimmy Merchant are now fighting back, vaulting their experience with the scammers into a new business venture and sharing the story to save other musicians grief.

SongFer LLC launched Memorial Day weekend 2021 and together these gentlemen will create custom professionally written and recorded songs for your special someone, special day, advertising jingle or special occasion. The genesis of the concept came because they already had one song in the bag and while it was essentially stolen from them, it begged the question “would someone who is not a thief like something like this?”

The answer is yes. The idea of custom songwriting is not 100% new (hence the swindlers picking up on it) but Songfer’s post-swindle spin on it is. Instead of harvesting requests and farming them out to freelancers as some companies do, Merchant and Hansen are working directly with clients individually and writing and recording the songs themselves. They aren't limiting things to traditional milestones either; they can help you celebrate your pet, promote your business, break up with a soon to be ex, provide a workout, relaxation or wake up song…you name it and they will put it to music.

More importantly, customers speak to them directly to convey the feeling they want to express instead of using a generic form to access a cookie cutter product. The result is a song that was created in a real collaboration with people who really know you.

Their combined resumes are mega impressive and broad enough to deliver in any genre you can name from country to funk; Jimmy Merchant, a Jersey Shore native, is a professional saxophonist, composer, and arranger. Some of the artists Jimmy has recorded/performed for are Jay and The Americans, The Chiffons, Denis Tufano, Robert Bannon and Adam Pascal. Jimmy is currently a substitute musician on Broadway for Mark Gross in the musical “Ain’t Too Proud — The Life and Times of The Temptations.”

Also a New Jersey native, is a singer songwriter, multi-instrumentalist and session player. His band, Bryan Hansen Band has played notable venues all through the East and West Coasts, including Winter NAMM, House of Blues Anaheim, The Troubadour in WEHO, So Far Sounds NYC & DC, Asbury Lanes, Hamilton Stage at UCPAC, Maplewood Stock, Bowery Electric and the Paramount Theater in Asbury Park. When he is not onstage, Bryan teaches private lessons, records sessions for various artists and sings for the Brain Trauma Unit at JFK Hospital for patients recovering from traumatic injuries.
And for other musicians out there, they offer insight on the widespread con that inspired them: imagine being at breakfast with friends and as one shares the story, so do all. Three musicians at the table received the same message on social media, veiled as an innocent request from a father and fan:
“I’m a big fan of your music and was wondering if you would compose a custom song for my son’s birthday? I am willing to pay…”

The scammer then goes on to describe their precious 5-year-old “Billy” and his love for Legos and his puppy Maxxie and ends with “mostly we want him to know his Mom and I are always here for him.” It’s a tearjerker for sure, but the tears are for the musicians who take the time to reply. Later they find out that Dad “accidently” sent $3000 instead of the agreed upon $300 and “would you mind transferring back the $2700 overpayment?” Um, no. While no one at the table fell hard enough for this to lose any cash, some of them already wrote the tunes.

“We received a message on Instagram during the pandemic with a song request from a woman for her son. She sent us all the details and it seemed legit. After completing the song we realized she was trying to scam us with a western union transaction. Unfortunately, this was very common with our musician friends who also received this message. Rather than just letting it go, we wanted to create a business that creates amazing memories for people. Especially after a year where it was difficult to connect with loved ones. Music bridges the gap and we are here to make that happen.” -Bryan Hansen