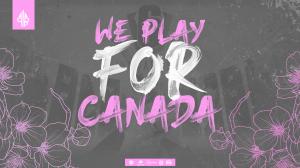 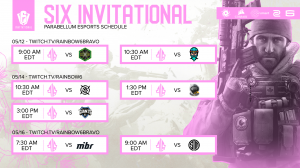 Parabellum Esports' team is in Paris competing at the Six Invitational, the biggest event for Rainbow Six Siege

We are coming to Paris as underdogs and leaving as champions.”
— Ben Feferman, CEO of Amuka Esports

TORONTO, ON, CANADA, May 11, 2021 /EINPresswire.com/ — Parabellum Esports, will participate in the Six Invitational which will take place in Paris from May 11th to May 23rd, 2021. Parabellum’s Rainbow Six Siege roster is poised to embark on a historic run for Canada as they will be the first Canadian team to qualify for this prestigious tournament.

The Six Invitational is an annual professional Rainbow Six Siege tournament hosted by Ubisoft, the game's developer, and publisher. Usually located in Montreal (home of the Ubisoft studio working on the game) the tournament gathers the best teams from all around the world. The event marks the end of the previous year and acts as an informal World Cup. However, this year due to the Covid-19 Pandemic this year’s SI event will occur in Paris. The 2021 Six Invitational marks not only the first major LAN Rainbow Six event but one of the first LAN events of any game since the pandemic started. The event will feature a total of a $3 million USD prize pool with the winner receiving $1 million USD.

"We are coming to Paris as underdogs, and leaving as champions. I'm so proud of all the players, coaches, managers, and of course our fans. I promise we will not let you down," according to Ben Feferman, CEO of Amuka Esports (parent company of Parabellum Esports)

The Six Invitational has consistently brought in record-breaking viewership. Last year's edition of the tournament had a total of 303,155 peak viewers across all platforms. The total broadcast had a total of nearly 90 hours of watch time. On Twitch alone the main Rainbow Six Channel had 5.1 million hours watched during the tournament all while having averaging 58,509 viewers.

Parabellum’s first game will be taking place on May 12th against Oxygen Esports. The players that are taking part in Parabellum’s R6 roster are Spiritz, Eskaa, P3NGU1N, KoolAid, Sonar, and Euphoria. For more information about the Six Invitational, the schedule, and more see: https://bit.ly/3y0vSKg

"We are excited to be representing Canada in the biggest Rainbow Six event. A lot of work has gone on behind the scenes to prepare the teams for a world-class event. We have been working with a performance team (FitGMR) to give our players a competitive edge for the event and feel our team is in prime shape for what should be an exciting, yet grueling round-robin. We have a whole country behind us, and we are looking to make Canada proud," according to Chris Lamarucciola, Head of Esports at Amuka Esports.

The Parabellum R6 team will be sporting a new pink jersey inspired by the cherry blossoms of Toronto and will feature all of their partners including CORSAIR, Zowie, Coinsmart, and FPS Pool as the title sponsor.

About Parabellum Esports
Founded in 2020, Parabellum is a Canadian Professional Esports Organization from Toronto and is competing in titles such as Rainbow 6, Rocket League, Super Smash Bros Ultimate, CSGO & more.