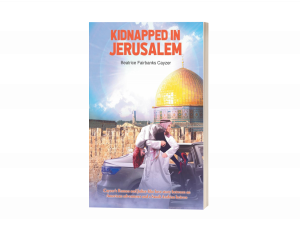 COOKSTOWN, NEW JERSEY, USA, May 11, 2021 /EINPresswire.com/ — Dennis has always lived a complicated and difficult existence, but the next steps that he will take in life will make his journey much more tumultuous. How much is he willing to do and how far can Dennis go in the name of a normal life and true love?

Beatrice Cayzer’s thrilling fiction "Kidnapped in Jerusalem" tells the story of Dennis McLearny. Dennis’s burdensome path was set off when he was raped at six years old. When he was 18, he went to prison for having sex with an under-aged girl. Incarcerated for 17 years, his life was made even more painful by the abuse he had to endure from fellow inmates and the prison chaplain. Free at 35, he is determined to better himself and hopes to have a normal life and marriage. He becomes a waiter on a passenger-freighter. Sometime after, he takes a leave to swim in Turkish waters where he meets, falls in love with, and elopes with Myriam al-Montee, a half-Turkish, half-Saudi Arabian Muslim woman. Finally, there seems to be a happy ending for Dennis, until he finds out about Myriam’s fanatical father, who hopes to use her to establish his dynasty and is known to behead any person showing fondness for her. When three women are beheaded at her father's orders, she warns Dennis that he could be next.

To escape death and the wrath of Myriam’s father, the couple set on chase through Turkey, Cairo, Jerusalem, and Saudi Arabia. Will they have the happy ending that they yearn, or does fate have a more vicious plan for them?

Beatrice Fairbanks Cayzer is a talented writer and a seasoned traveler. She has taken many of her life experiences into her writing. Coming from an illustrious family, Cayzer has always lived a colorful life. Her two ancestors who came to Upper Virginia in 1620 helped found their community. Before turning to writing, she founded the Cayzer Museum for Children in England where she was the wife of Stanley Cayzer a grandson of Sir Charles Cayzer, founder of shipping companies that evolved into Caledonia Investments, and nephew of Admiral Lord Jellicoe, the second Governor General of New Zealand. In Oxford shire, she wrote "The Princes and the Princesses of Wales." In Guernsey, she wrote The Royal World of Animals. Returning to the USA, she wrote nine Rick Harrow novels, winning the Book of the Year Award from the Horseracing Writers’ Association. In 2016, she had a sell out with "The Secret Diary of Mrs. John Quincy Adams" and in 2018 had another sell out with "New Tales of Palm Beach."