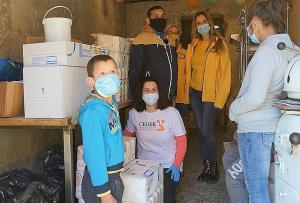 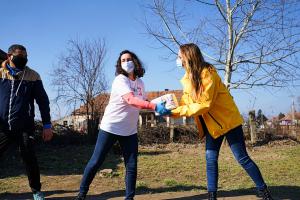 The project was a joint venture by the Scientology Volunteer Ministers of Budapest and CEDEK, a Chabad-affiliated Jewish charity dedicated to helping marginalized communities. 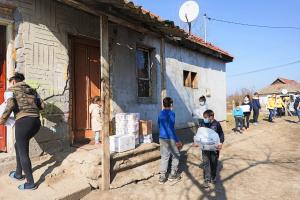 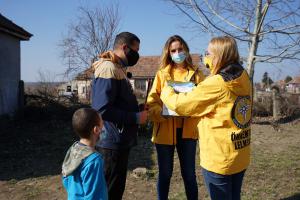 LOS ANGELES, CALIFORNIA, UNITED STATES, March 7, 2021 /EINPresswire.com/ — Alex Galamb, a baker and pastry chef, is teaching marginalized children a profession that can transform their lives. The Volunteer Ministers from the Church of Scientology Budapest teamed up with the Chabad-affiliated CEDEK charity to support Galamb’s work by bringing him a large donation of baking supplies and clothing for his young students.

According to a 2017 study by the Badur Foundation, a Hungarian nonprofit whose purpose is to alleviate poverty, some 80 percent of the estimated 8 million Hungarian Roma live in poverty.

Galamb, 22, was one such “statistic.” Raised in a Roma family of eight, his father died when he was 7 and at 16 he ended up in a children’s home. But that was a turning point for him. From there, he was able to catch up with his schooling and pursue and accomplish his dream of becoming a baker.

When the pandemic struck, the lockdown prevented him from going to work. It also closed the schools. “It was raining all the time,” he said in an interview published on ARD, “and so they couldn't play outside either. Since I love baking, I always do it at home and the three children who live with me in the house always help me with it. We simply invited the children from the neighborhood to take part.”

Galamb is creating his own bakery in an abandoned building in his neighborhood. He and a brother have plastered the walls and repaired and tiled the floor. Recent media on his work resulted in support for his project including someone coming to connect the building to the electricity grid.

Well on his way in his own professional training and working full time as a baker, Galamb has passed his confectionery exam, will graduate in May, and is scheduled to take his final professional exam in June.

In addition to the donations of supplies and clothing, Scientology Volunteer Ministers of Budapest presented Galamb with copies of Stay Well educational booklets. These, along with more than a dozen public service announcements that can be viewed in Magyar on the How to Stay Well Prevention Resource Center on the Scientology website, are simple enough for children to understand. Just by applying this information, they can keep themselves and their families well through the current and any future waves of COVID-19.

Throughout the pandemic, Scientology Volunteer Ministers of Hungary have been providing help to those in need. They delivered fresh fruit to hospital staff who were operating under intense stress at the height of the first wave. They have worked with other charities to bring durable food, fresh fruit, vegetables and sanitary supplies to nonprofits, schools and impoverished villages. And they made the holiday season special for children who would otherwise have gone without.

The Scientology Volunteer Ministers of Hungary are headquartered at the Church of Scientology Budapest, whose new home was dedicated in 2016 by Mr. David Miscavige, ecclesiastical leader of the Scientology religion.

The Church of Scientology Volunteer Ministers program is a religious social service created in the mid-1970s by Scientology Founder L. Ron Hubbard.

A Volunteer Minister’s mandate is to be “a person who helps his fellow man on a volunteer basis by restoring purpose, truth and spiritual values to the lives of others.” Their creed: “A Volunteer Minister does not shut his eyes to the pain, evil and injustice of existence. Rather, he is trained to handle these things and help others achieve relief from them and new personal strength as well.”

For more information on the international Stay Well initiative, visit the new interactive timeline on the Scientology website, 20/21: A Look Back & A Look Ahead.