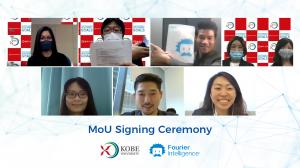 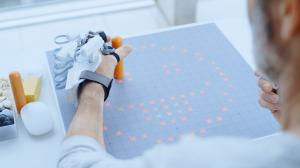 The HandyRehab™ hand exoskeleton on the OTParvos™ digital smartboard.

This partnership aims to promote advanced rehabilitation technology and integrate group therapy into the clinical setting.

SINGAPORE, March 1, 2021 /EINPresswire.com/ — Fourier Intelligence has started a new partnership with Kobe University, Japan. This partnership signifies Fourier Intelligence’s global vision in promoting accessibility and adoption of rehabilitation technology. For Kobe University, this is the continuation to integrate education, research, and technology to support clinicians in delivering top-quality rehabilitation services.

The global rehabilitation robots market size was valued at USD 529.8 Million in 2018 and is projected to reach USD 2,617.3 Million by 2026, exhibiting a CAGR of 22.1% during the forecast period. This is according to market research firm Globe Newswire. Demand for rehabilitation robots is expected to be very strong in Japan, given its rapidly greying and shrinking population.

Rehabilitation robots are expected to help the elderly regain their independence of daily living and avoid becoming bed ridden. Robotics can also enable patients to train independently and with minimum clinician intervention. This could be a major incentive for countries facing the dwindling population of working-age people who must care for the increasingly mushrooming number of retirees. By 2035, it is estimated a third of Japan’s population would be aged 65 or older.

“We’re delighted to be able to forge this new partnership with Kobe University, which is one of the highest-ranked universities in Japan,” said Mr Zen Koh, Fourier Intelligence’s Global Hub Chief Executive Officer. “This collaboration aims to introduce previously research-oriented projects on rehabilitation robotics into clinical settings. This will tremendously improve the efficiency of clinical services for clinicians and resulting in better clinical outcomes for patients.”

“We are excited in this partnership with Fourier Intelligence and to join their global research network in introducing advanced rehabilitation technology for Japan’s rehabilitation services,” said Professor Rumi Tanemura. “We believe this is mutually beneficial, as Kobe University trains some of the best therapists in Japan and combining our in-depth clinical knowhow, we can jointly develop technologies that will be highly relevant for our hospitals.”

The partnership will focus on efficacy research on upper limb robotics for patients. Ultimately, the partnership will collaborate on multi-centre trials that will involve Fourier Intelligence’s extensive global network of researchers and laboratories.