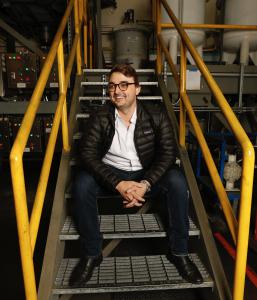 Urbix Chairman and CEO in the plant near Falcon Field Airport in Mesa, Arizona.

The Inc. status gives us room for growth. It will accommodate the structure of the company into any future we can create.”
— Urbix Chairman, Nico Cuevas

MESA, AZ, UNITED STATES, January 26, 2021 /EINPresswire.com/ — Though many companies have been struggling through the challenges presented over the last year, a growing Mesa, Arizona-based company grew rapidly throughout 2020, a trend it shows every sign of continuing this year. The past 12 months have exceeded the company’s previous expectations, adding personnel at a faster-than-expected pace and passing other markers of growth and success.

For example, in 2020, Nico Cuevas, Urbix executive chairman and CEO, felt the company had outgrown the confines of the LLC that was formed as Urbix back in 2014. Urbix was restructured as a fully incorporated company.

“The Inc. status gives us room for growth. It will accommodate the structure of the company into any future we can create,” says Cuevas.

Additionally, the 30,000 square foot facility near Falcon Field Airport in Mesa, Arizona that the company moved to near the end of 2019 is filling rapidly.

“When we first moved into the space it really felt as though we might never be able to fill it,” Cuevas says now. “I mean, that’s what we were building towards. But the reality of 30,000 nearly empty square feet is somewhat overwhelming. It’s an awful lot of space!”

Fast forward just over a year and the space is filled. Not to bursting, Cuevas is quick to point out. “We have the space and we’ve grown to fill it, but we’re still pretty spread out in there. But there are no empty chunks anymore. It’s been incredible to be part of and to watch our early dreams and ideas take shape.”

Though the pandemic has altered the shape of what the last year looked like for the company, they have continued to grow in many ways, moving ever closer to their goal of being the most significant producer of purified and spherical natural graphite outside of China, and the only truly green producer in the world.

Urbix, Inc. is creating radical change in the way natural graphite is refined and commercialized. The company specializes in all aspects of the graphite value chain. Urbix’s advanced technology includes cost and environmentally aware purification methods and significant intellectual property developments in a wide range of applications.