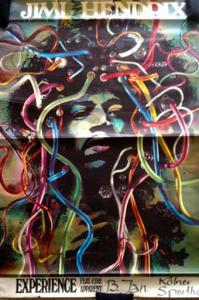 Hawley adds, "Kieser is considered one of the most influential designers of jazz and rock posters. Many of his concert iconic posters became fixtures in the music scene. He brought more graphic qualities to the layout by combining photography with three-dimensional fantasy object-like arrangements. Besides Hendrix, Kieser also designed posters for the Grateful Dead, Miles Davis, and The Who."

Kieser produced posters for the following Hendrix shows in 1969:

Any condition is accepted. Please call or email Andrew. Please call 310-346-1965 or email him at Andrew (at) vintageconcertposterbuyer (dot) com.