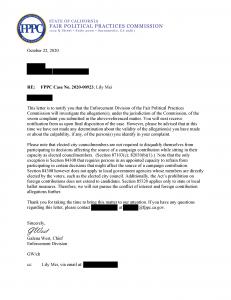 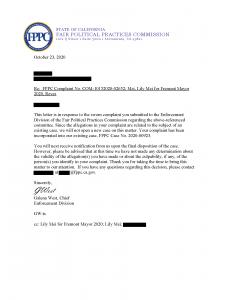 The FPPC merges all allegations into a single case that will be investigated.

As of October 22, 2020, Fremont Mayor Lily Mei is now being investigated by state authorities for potentially violating state election law.

On October 23, 2020, the FPPC confirmed that Lily Mei and Lily Mei for Fremont Mayor will both be investigated and that additional allegations have been merged with the existing case.

In 2017, Lily Mei was fined for violating 5 counts of state election law during her 2016 campaign. This included not reporting campaign donations and campaign expenditures.