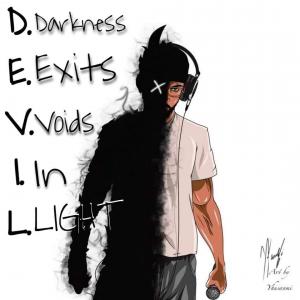 NEW YORK, UNITED STATES, September 28, 2020 /EINPresswire.com/ — Up and coming artist K Twist FM3 of the New York underground rap scene is breaking his way through the ceiling into mainstream with his new demo D.E.V.I.L. (Darkness Exists Void In Light) as a precursor to his full 12 track album. The 26 year old rapper has brought a new sound that marries traditional New York Style rap with modern-day music to create a whole new sound, bringing a fresh, new take on the hip hop and rap genre. K Twist FM3 has given exclusive Soundcloud access to the 6 tack demo before releasing the full album on Oct. 14th 8 PM EST on all major streaming platforms.

D.E.V.I.L. explores the human psyche of a young artist, taking you through the emotional ups and downs of trying to find one’s way in the world. K Twist dives into the all-too-real issues facing young artists all over the world, while walking the listener through his own personal journey and struggles in one of the most unforgiving industries. Finding himself at his lowest point in life turned out to be his biggest inspiration for D.E.V.I.L., allowing him to see the world from a new perspective and bringing new life to his music and his purpose.

K Twist’s style of rap is truly a new breed that brings new perspective in a saturated market of redundant sounds. The full 12 track album will be available on all major streaming platforms come October 14th at 8PM EST To stream the exclusive demo of D.E.V.I.L. please visit: https://bit.ly/3i5gXoI

K Twist FM3 (Family. Money. Music. Muscle) was born and raised in snowy upstate New York. Beginning his career in high school, K Twist emerged on the scene participating in various rap battles in clubs, winning multiple titles and gaining local traction for his talents. Once in college, he began recording and truly establishing his own unique sound, which began to make waves in the underground internet scene for his remixes and mixtapes. Marrying traditional New York rap with modern music, K Twist is a true Emcee and his sound brings new life to the hip hop and rap genre. In 2012, he began performing country-wide in various music festivals and showcases. *teaming up with his now engineer of 6 years Ian Dominique of Shane's Place Studios* Now in 2020, at age 26, K Twist is breaking through the underground ceiling and emerging into mainstream with his unique and unprecedented sound.