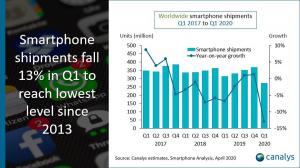 Smartphone shipments in Q12020 reached their lowest levels since 2013

Samsung returned to the top of the market, but its shipments fell 17% to 60 million.

In February, when the coronavirus was centered on China, vendors were mainly concerned about how to build enough smartphones to meet global demand. But in March, the situation flipped on its head.”
— Ben Stanton, Senior Analyst

SINGAPORE, April 30, 2020 /EINPresswire.com/ — The coronavirus pandemic wreaked havoc on the smartphone market in Q1 2020, with shipments falling 13% to 272 million units. Samsung returned to the top of the market, but its shipments fell 17% to 60 million. Huawei shipped 49 million, as its mix continues to shift toward China and away from overseas markets due to its US Entity List status. Apple was the third largest vendor, down 8% with 37 million shipments. Xiaomi, the best performer in the top five, managed 9% growth to hit 30 million units, while Vivo finished fifth with 24 million units, up 3%.

The smartphone market entered 2020 in good health, having just recorded two consecutive quarters of growth. “But demand for new devices has been crushed,” said Canalys Senior Analyst Ben Stanton. “In February, when the coronavirus was centered on China, vendors were mainly concerned about how to build enough smartphones to meet global demand. But in March, the situation flipped on its head. Smartphone manufacturing has now recovered, but as half the world entered lockdown, sales plummeted. Poor business results, employee redundancies and furloughs are causing a great deal of anxiety and uncertainty. Smartphones are still a necessity for most people, and device availability in online channels has enabled those who need to replace a broken or lost phone to do so. But many customers who would have bought a new smartphone as a luxury have delayed that purchase.”

“Few smartphone vendors were able to withstand the impact,” said Canalys Analyst Shengtao Jin. “Samsung was in a positive position in February, due to its manufacturing focus in Korea and Vietnam. But this advantage quickly dissipated as COVID-19 spread around the world. Apple was one of the least affected vendors, owing to strong sales of the iPhone 11 in the early stages of the quarter. Its recent iPhone SE launch is strategically vital, as Apple needs to prop up iPhone shipments as its flagship customers await 5G devices. Huawei was forced to juggle the dual impact of coronavirus and its ongoing US Entity List problems. Its overseas shipments plummeted 35% as it launched its first P series handset family without Google Mobile Services, the P40. But channels are wary of exposing themselves to the risk of these untested products, so they are ranged in fewer channels than their predecessors, and initial channel orders are lower than Huawei would expect.”

“The impact on smartphone channels is colossal,” said Canalys Analyst Vincent Thielke. “Omni-channel retailers in strict lockdown regions, such as Europe, are doing their best to shift offline store stock into online distribution channels, but this is costly, and their capacity, in terms of warehousing, haulage and delivery, is not geared up for a full switch to online. This also limits the brand-new devices they need to buy from vendors and distributors in the short term. In these regions, it is the ecommerce channels that will have a clear advantage in the coming weeks.”
“Most smartphone companies expect Q2 to represent the peak of the coronavirus’ impact,” said Stanton. “It will test the mettle of the industry, and some companies, especially offline retailers, will fail without government support. As lockdowns around the world start to lift, the full economic damage will become visible. Smartphone companies must adapt their strategies to mitigate the impact, as cashflow will be critical in the coming months. But if they cut back too much on product spend, marketing spend and new strategic initiatives, they risk losing agility, and will lose ground to rivals once demand bounces back. It is vital to strike a balance.”