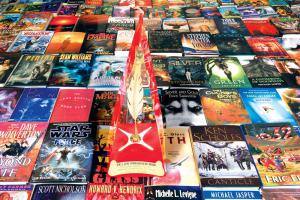 Hollywood’s future resides with winners of L. Ron Hubbard Writers of the Future

Its no wonder that Hollywood's future is seen to reside with the winners of L. Ron Hubbard's Writers of the Future.

People crave to be transported out of the mundane world into a place that is new and wondrous, and that is what speculative fiction does best.”
— David Farland

HOLLYWOOD, CA, UNITED STATES, January 1, 2020 /EINPresswire.com/ — With seven out of the top ten grossing movies of all time being science fiction and fantasy, it’s no wonder that Hollywood’s future is seen to reside with the writers of science fiction and fantasy, or more specifically the winners of the L. Ron Hubbard Writers of the Future Contest according to David Farland, screenwriter, NYT bestselling author, and Writers of the Future Contest coordinating judge.

“The mentality is simple in Hollywood: if it makes money, you do it. And if it keeps making money, you keep doing it,” says Farland from his home in Saint George, UT. “And for reasons that are very simple, science fiction and fantasy have proven time and again to be huge moneymakers.” The top ten grossing movies of all time, of which seven are science fiction or fantasy, include:

And while “Star Wars: The Rise of Skywalker” is rapidly closing in on this list, the total number of science fiction and fantasy in the top ten will remain at seven.

“All of the top-grossing movies of all time have one thing in common,” Farland says. “They all take the viewer to another time, another place. People crave to be transported out of the mundane world into a place that is new and wondrous, and that is what speculative fiction does best.”

Farland was the grand prize winner of the Writers of the Future Contest in 1987 and has since gone on to publish over fifty novels, with several becoming NYT bestsellers. Due to his success, he later became a contest judge, a video game designer, and a screenwriter. With all this diverse experience now to his credit, Farland observed, “L. Ron Hubbard was a very prolific fiction writer during the 30s and 40s, and wrote several works that are classics in their field. He worked as a writer for Columbia Pictures for the highly successful movie serial The Secret of Treasure Island and The Great Adventures of Wild Bill Hickok. And for Warner Bros., he worked with Norvell Page scripting The Spider Returns. So I find it very interesting that he created the Writers of the Future Contest, and that the legacy continues with writers like myself who are providing more material to feed Hollywood’s voracious appetite for science fiction and fantasy.”

Writers of the Future now in its 36th year is the world’s largest and most recognized merit competition for writers of speculative fiction. Its over 400 winners have gone on to publish over 1,150 novels and 4,500 short stories. The L. Ron Hubbard Presents Writers of the Future volumes can be found wherever books are sold. For more information go to www.writersofthefuture.com. 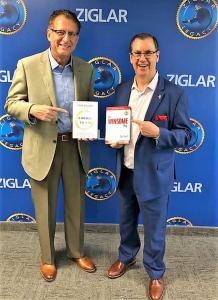 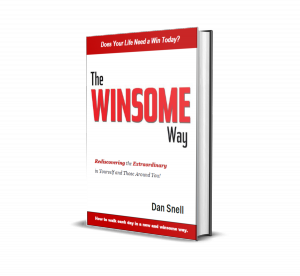 The Winsome Way by Dan Snell 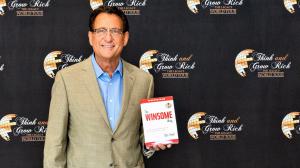 Every once in a while in life, a person just needs a WIN in life to get back on track.”
— Dan Snell

Snell had been personally encouraged and inspired to write his new book, THE WINSOME WAY by Zig Ziglar himself, after Snell spoke at a Monday morning motivational and devotional breakfast at Ziglar headquarters in Dallas, TX.

Dan Snell noted upon receiving Tom Ziglar’s foreword, “I have shaken hands with five US Presidents, yet I think my biggest thrill ever was shaking Zig’s hand that first time and actually becoming a friend until his passing in 2012. I’m honored that son Tom would support me with his kind words.”

Snell first met the senior Ziglar in 1999 in St Louis, MO, at a Get Motivated host hotel. Ziglar, for decades the leading motivational speaker in the country, had been Snell’s hero since he had heard him speak in the 80’s in his home state of Nebraska. After that St. Louis meeting the two met numerous times discussing and sharing their passion for serving and motivating others.

Tom Ziglar today carries on the Ziglar legacy and name, along with sisters Julie and Cindy, and now also with Tom’s daughter, Alexandra, herself an up-and-coming coach, trainer and speaker.

Tom Ziglar penned in the foreword about Snell; ‘Being the “Proud Son” of Zig Ziglar, and now working daily and to carry on my Dad’s legacy, I’ve met and worked with hundreds of incredible people. Dan Snell, author of this book “THE WINSOME WAY” is one such person. The pages ahead (in The Winsome Way) are an extension of Ziglar inspiration to others that was my Dad’s heart and soul.’

The Winsome Way is a personal development book that is widely being used in sales organizations, customer service team training and as life relationship, personal and professional success coaching for graduates and people of all ages.

Snell borrows on his award-winning career as a sales professional, a five-term, ten-year elected official, a professional basketball referee and a nationally recognized ministry leader to deliver his ‘winsome’ points.

Snell’s next book in the ‘Winsome’ series, entitled ‘The Winsome Candidate’ speaks to the current national challenge of divisiveness, as well as the lack of vision and progress on serious issues. Snell will offer the ‘winsome way’ to run, win and serve in elective office via a foundation of public service and not politics.

THE WINSOME WAY debuted as an international #1 bestseller on Amazon, and is available at various booksellers including Amazon, Barnes and Noble, Hudson News, Books-a-Million, Target, Walmart and many more. Autographed copies and group purchases are available on Snell’s website at www.TheWinsomeWay.com

Tom Ziglar is the author of CHOOSE TO WIN, a national bestseller. Ziglar Inc offers training, coaching and seminars via their Dallas, TX, headquarters. Their website is www.Ziglar.com

AHMEDABAD, GUJARAT, INDIA, January 1, 2020 /EINPresswire.com/ — INDIA PLASTICS SHOW 2020 is a global platform for an industry confluence to everyone who matters in the plastic industry joined by manufacturers, suppliers, innovators and customers from across the globe. The major focus of the exhibition will be on EXPLORATION, INNOVATION, EXPANSION AND CO OPERATION. The exhibition will showcase the latest technological developments in the field of plastics and polymers, offering a world of global technological know-how, consulting and joint venture opportunities. The event – INDIA PLASTICS SHOW 2020 is being held from 20th to 22nd September, 2020 at the prestigious Helipad Exhibition Centre, Gandhinagar, Gujarat. The exhibition is conceived and promoted by K AND D Communication Ltd.

Recognition is wonderful and always appreciated, but the greatest reward is when my students thank me for the care and effort I put into teaching them. …It’s the best feeling!”
— Professor Walker

SURPRISE, ARIZONA, UNITED STATES, January 1, 2020 /EINPresswire.com/ — Maldest Walker has accumulated over 60 professional and academic awards to date, and now, she can add another to the list. Walker has been designated a 2019 Phi Delta Kappa (PDK) Distinguished Educator.

The prestigious honorific is given to PDK’s most exceptional members who meet eligibility criteria, which include the advancement of education in the association’s core values of research, service and leadership.

Walker’s work as an English professor and tutor trainer helped to qualify her for the award. As a professor, she has filled a full-time faculty position with a recommendation for reappointment, after earning a top adjunct faculty designation for receiving perfect evaluations over a two-year period at Estrella Mountain Community College (EMCC) in Avondale, Arizona. As a tutor trainer, she has coedited tutorials for students in EMCC’s Academic Success Center (or writing center). EMCC itself, a Maricopa Community College, has been ranked in the top 10% of community colleges in the United States and the Best Community College in Arizona.

When Walker is asked what the PDK honor means to her, she remarks, “Although I already have a number of awards, I have never received an internationally recognized award for my work in higher education, and to receive it from such an elite organization as PDK makes it even more special.”

PDK International is a professional association for educators known for its collaboration with Gallup on conducting the PDK/Gallup Poll of the Public’s Attitudes Toward Public Schools. For Walker this latest recognition brings her full circle, having already been inducted into PDK’s selective Pi Lambda Theta honor society back in 2009 for her work as an elementary teacher in the early part of her nearly 20–year career in education and for her graduate coursework at National University, which includes distinction in her MAT thesis for receiving a perfect score (100%).

When asked what the most rewarding part of teaching is for her, Walker says, “Recognition is wonderful and always appreciated, but the greatest reward is when my students thank me for the care and effort I put into teaching them, tell me they learned something in my class that helped them better understand the subject matter or even helped them in other coursework, take me again for another course and refer their family and friends to my class. It’s the best feeling!”

Most educators probably agree with that assessment, but becoming an internationally recognized distinguished educator is definitely a close second.