In this delightful read with me children’s book with an important message, a group of imaginary root vegetable friends guide a little girl through her questions about differences, life, and others around her. 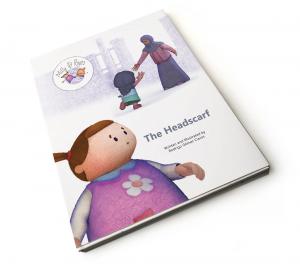 Learning to accept and appreciate people and things that are different from us through fun and adventure.

Milly is a happy little girl who loves planting seeds, watching vegetables grow in her grandma’s rooftop garden, and playing with her new friend, Aamira, on the school playground.

In times of divisiveness, world migrations, and messages of hate, Milly & Roots plants in the hearts of children the seeds of acceptance and respect for others.

Aamira runs to a woman near the playground gate. Milly can't see
her clearly, her face and most of her body are covered.
She isn't used to seeing mommies dressed that way. She is so…
different.”
— Rodrigo Gómez Claros

MURFREESBORO, TENNESSEE, UNITED STATES, January 25, 2020 /EINPresswire.com/ — Middle Tennessee State University professor Rodrigo Gómez Claros launched his first written and illustrated children’s book dealing with such a meaningful topic. The author will celebrate the launch of his book in the coming weeks with an event that will include non-Muslim and Muslim families with young children.

Milly is a happy little girl who loves planting seeds, watching vegetables grow in her grandma’s rooftop garden, and playing with her new friend, Aamira, on the school playground. But one day when Aamira’s mother comes to the playground for a visit, Milly sees a strange cloth on her head. She can’t even see Aamira’s mother’s face! Suddenly, Milly is confused and has a lot of questions she needs answered.
​
After Milly asks her grandma about the cloth, she is led through the roots of the plants in the garden to a distant place on an exciting adventure guided by an uninhibited potato and other imaginary root vegetable friends, where she learns to accept others, even when they are different from her.

Rodrigo Gómez Claros is a Hispanic artist from Colombia who enjoys telling stories about his cultural background. He is passionate about the immigrant story since he is an immigrant himself. He is a director and producer of animated content for preschoolers. The author worked in the past for Fisher-Price Inc., and he is currently Assistant Professor of Animation at Middle Tennessee State University.