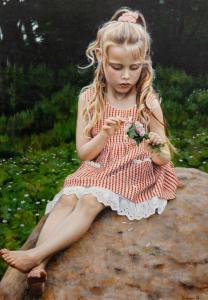 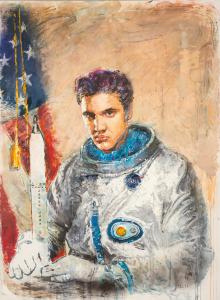 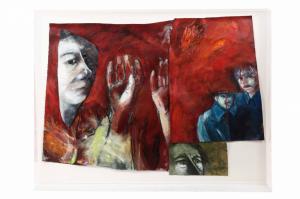 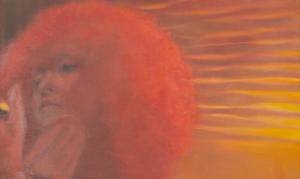 Mr. Cafesjian (N.Y., 1925-2013) was a legal publishing legend, art connoisseur and philanthropist who collected with a discerning eye and adventurous spirit.

DOWNTOWN LOS ANGELES, CA, UNITED STATES, December 13, 2019 /EINPresswire.com/ — Andrew Jones Auctions will kick off the new year and the new decade on Saturday, January 11th, 2020 with a very special sale dedicated to fine art from the collection of Gerard Leon Cafesjian (N.Y., 1925-2013), the legal publishing legend, art connoisseur and philanthropist who collected with a discerning eye and an adventurous spirit.

The auction will be held online and in the Andrew Jones Auctions gallery located at 2221 South Main Street in downtown Los Angeles, starting promptly at 10:30 am Pacific time. Internet bidding will be facilitated by LiveAuctioneers.com and Invaluable.com. In all, 140 lots will come up for bid, to include contemporary paintings, sculptures, prints and mixed media works.

“In six decades of collecting, Gerard Cafesjian broadened his vision and honed his eye to bring together international avant-garde works that make statements, reveal beauty, display whimsy and challenge the viewer,” said company president and CEO Andrew Jones. We’re honored to offer this segment of his collection, which features international artists in a variety of media.”
Two works by Vesna Kittelson (Croatian/American, b. 1947), from the artist’s War Painting Series (est. $2,000-$3,000) reveal Cafesjian’s concern with crimes against humanity and social injustice. His eye for color and playfulness are evident in pieces like Yvonne Canu‘s (French, 1921-2008) Fleur sous les fleurs (est. $2,000-$3,000) and Roberto Sebastian Matta’s (Chilean, 1911–2002) Untitled, 1970 (est. $2,000-$3,000) as well as irreverent works like Igor Gusev’s (Ukrainian, born 1970) large scale oil on canvas titled Elvis Returns, 2010 (est. $6,000-$8,000).
An admiration for the intimacies that can be found in world localities is revealed in Margaret Leahy’s (American, 20th century) acrylic Brooklyn Backyard, 1981, which depicts a window’s view of his childhood neighborhood (est. $600-$800). Further afield locations are seen in the Virgilio Raposo (Portuguese, born 1955) painting titled Lisbon, 2003 (est. $800-$1,200) and Jyothi Basu’s (Indian, born 1960) pastel work titled The Chosen One, 2004 (est. $3,000-$5,000).

Gerard Cafesjian was born in Bensonhurst, Brooklyn to Armenian refugees fleeing genocide in 1915. Raised in New York City, Cafesjian immersed himself in the art culture that surrounded him, spending time at museums and art galleries. After serving in the Pacific during World War II, he returned to New York to pursue studies in economics and law at St. John’s University Law School, Cornell University and earned a Doctorate of Jurisprudence from Columbia Law School.

Cafesjian also made ti0—14-0-0-0-0-0me to study painting and sculpture at the Art Student’s League. After graduation, Cafesjian became an editor with the innovative Minnesota-based legal publishing firm of West Publishing and ascended the ranks to executive vice president. He developed the West Legal Directory and the groundbreaking exhibition program titled Art and the Law in 1975.
Cafesjian retired in 1996 and focused his resources and time on philanthropic pursuits, mostly in his ancestral home of Armenia. He founded the Scottsdale Museum of Contemporary Art in 1999 and in 2001 he created the Cafesjian Family Foundation, which developed infrastructure for cultural enrichment, financial services, media and renewable energy in Armenia.
One of his proudest achievements was the establishment of the Cafesjian Museum Foundation and the Cafesjian Center for the Arts, which opened in Yervan in 2009. The museum holdings boast over 5,000 works derived primarily from his own vast and varied collection. Cafesjian wanted the center to promote and support historic and contemporary Armenian artists such as John Altoon, Sonia Balassanian, Armen Eloyan, Archille Gorky and Martiros Sarian. He also strived to bring the best of international contemporary art to Armenia.
Gallery previews will be held Thursday and Friday, January 9th and 10th, from 10 am to 5 pm Pacific time both days. Andrew Jones Auctions has two more sales planned for January: an UnReserved on Main Street Auction on Saturday, January 26th; and a DTLA Collections & Estates Auction on Sunday, January 26th; both to be held online and in the Los Angeles gallery.

Andrew Jones Auctions is downtown Los Angeles’ only full-service fine art and antiques auction house with an understanding of market trends and foresight for the 21st century. The staff has a wealth of knowledge with international experience and has worked at major international auction houses in both America and Europe, successfully sourcing property from across North America.

The sales are diverse, eclectic and fun, featuring items from the antiquity to the 21st century including fine art, decorations, design, furnishings, jewelry, unique accessories and more. For more information on the January 2020 auctions, please visit www.andrewjonesauctions.com.
# # # #