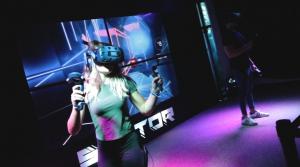 130″ display conveys all the action 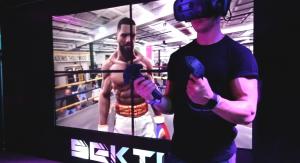 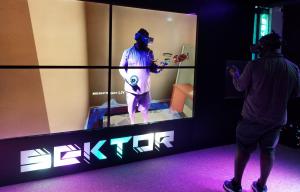 The Sektor VR arcade arena offers a unique social gaming experience with a new class of design. It’s unlike any virtual reality solution on the market today.

It’s one of VR’s greatest challenges, social engagement. With Sektor, I wanted to make a VR attraction that's a true spectator sport and is fun for everyone, not just whoever’s turn it is to play.”
— Chris Orgeron, founder of Machine Making and creator of Sektor

HOUSTON, TX, UNITED STATES, December 3, 2019 /EINPresswire.com/ — As the majority of the population still hasn’t tried Virtual Reality, availability of the complicated and expensive hardware in amusement venues has been good for expanding the reach of the burgeoning medium. Pushing the limits of location-based entertainment (LBE) we find Sektor, a VR arcade arena in which players enter a whole new realm of gaming. While the VR arena concept itself is not new, Sektor improves upon the status quo with cutting-edge tech, including wireless headsets for free-roam gameplay, a huge eye-level screen, and a mixed reality broadcast that allows the audience to engage with all the action.

“Sektor takes an experience that is inherently isolating, because you’re basically wearing a blindfold, and makes it a group activity. It’s VR’s greatest challenge, social engagement. With Sektor, I wanted to make a VR attraction that's a true spectator sport and is fun for everyone, not just whoever’s turn it is to play.” – Chris Orgeron, founder of Machine Making and creator of Sektor

Using mixed reality technology, Sektor captures the player’s image and live renders them within the game environment on the display screen, all achieved without the typical unsightly green screen. There’s no need to glance back and forth between your flailing buddy and a tiny monitor that shows their game environment to enjoy the spectacle. With these design elements Sektor achieves a gaming environment that's open and inviting, encouraging group participation and play. The upcoming Sektor Gods title will also allow bystanders to interact with VR players via smartphone, making the experience an even bigger party.

Gamers can play Sektor’s proprietary titles like Sektor Ball – picture 3D Pong on steroids – or the hottest third-party VR games, including hits like Beat Saber and Tower Tag. Sektor stands out by offering family-friendly titles that employ a Player vs. Player approach to maximize variability and replay, leaving the legion of on-rails zombie shooters to other platforms. Sektor currently offers two-player arena models with several designs to choose from, and a six-player arena with accompanying new e-sports title is currently under development.

About Machine Making:
Machine Making is a pioneer in high fidelity, turn-key, multiplayer, free-roaming commercial VR attractions for the amusement industry. With innovative solutions and revolutionary designs, Machine Making delivers an effortless system for owners and operators to provide virtual reality solutions to their guests. Machine Making was founded in 2018 to innovate on VR arcade hardware and software and is based in Houston, Texas.

Find us on the web:
www.SektorVR.com

SEKTOR – The Next Generation VR Arena