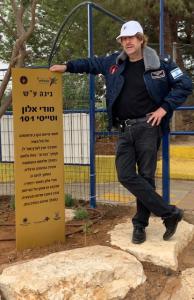 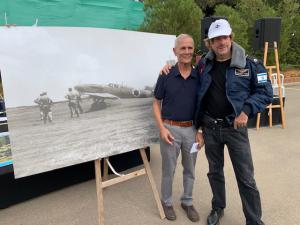 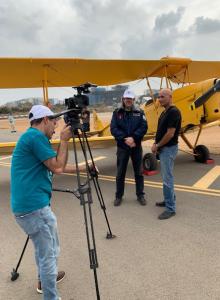 Mike Flint at the event picture 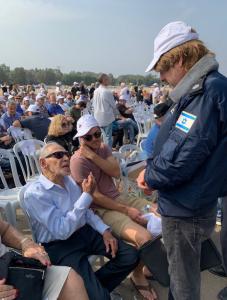 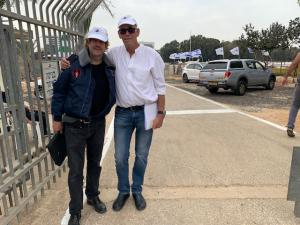 Mike Flint at the commemoration

The Herzliya airport ceremony celebrated the renaming of the airport named after the late Lt. Col. Modi (Mordechai) Alon & the commemoration of 101st Squadron.

The Herzliya airport ceremony celebrated the renaming of the airport to be named after the late Lt. Col. Modi (Mordechai) Alon and the commemoration of 101st Squadron. (The very same squadron Mike Flint was a member of.) The ceremony honored the squadron’s activities and the MACHAL fighters in the field during the War of Independence. The road to the airport will now be named MACHAL. (Stands for Volunteers from Overseas.)

“This is quite an honor the MACHALniks aviators deserve,” praises Mike Flint, “and will unlikely ever happen again.” The Mayor will be presenting a plaque to those involved, and the event was held on Friday, November 15, 2019.

The Air Force entertainment group performed in the ceremony and there were speeches from Commander of the Air Force Major General Amikam Norkin, President of the Air Force Foundation Major General (Res.) Gideon Shefer (Shporer), Airport Authority Director Yaakov Ganot, and Mayor of Herzliya Moshe Badlon. Mike Flint will also be giving the mayor a proclamation from the City of Beverly Hills.

As of now, Israel has two airports; Ben Gurion International Airport, named after Prime Minister David Ben Gurion, and Ilan Ramon airport, named after Israel's first astronaut who was killed on the fatal mission of shuttle Columbia. Now, this is the 3rd airport that honors the sacrifices of those that came before us.

Mordechai "Modi" Alon was an Israeli fighter pilot who, with the formation of the Israeli Air Force in May 1948, assumed command of its first fighter squadron and participated in the IAF's first combat sortie on May 29, 1948. On June 3rd he scored the IAF's very first aerial victories, downing a pair of Royal Egyptian Air Force C-47s over Tel-Aviv. He was killed when his plane encountered trouble lowering landing gear and consequently crashed.

Meanwhile, Micthell Flint, Producer Mike Flint father, set up a brave and humane example when he volunteered to serve in the fledgling Israel Air Force of 1948 and thus helped to win Israel’s independence.

“I think our family should all join in commemorating these sacrifices and contribute a significant sum to honor them as part of the renaming of the Herzlyia airport.” concludes Nurit Greenger of the Jerusalem Post.