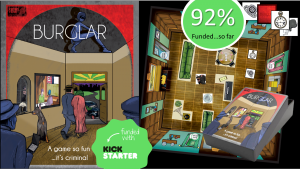 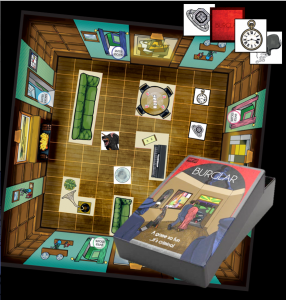 Close up of the board 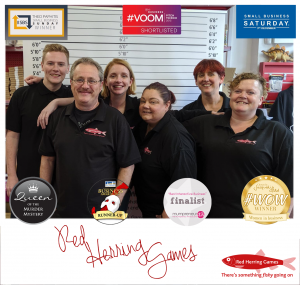 The team behind burglar

"It's been a very exciting year" Jo Smedley, Managing Director and the creative mind behind this new family board game said. "We've had this project underwraps since January when we contracted in two consultants to help us turn our dream into a physical product."

Burglar is a game involving skill, chance, memory and tactics as players hunt for loot and get the chance to block opponents from reaching their own target items. The aim is to collect all three items and escape the house before anyone else.

The game board and tiles have the simple elegance of 1920s sophistication and it's one of those games that's simple to learn but different every time you play.

It's a family friendly game that lasts around 30 minutes which gets more devious every time as you learn tactics to frustrate opponents and use your best negotiating skills to gang up on players.

"We've explained how tight the deadline is for Christmas to all our supporters." said Jo. "Manufacturing takes around 45 days, which means it's unlikely it'll be here before Christmas day – but you never know…"

The reason for the delay in releasing the board game was due to early interest by leading board game manufacturers. "We wanted to give them time to review the product fully before we committed to launching it ourselves." Jo said. "The game has unique game play mechanics which were popular for the licensing division within the leading brands, but the wheels turn incredibly slowly in these larger companies and so we've decided to go ahead with our original theme."

Red Herring Games are advising board game enthusiasts to pledge on their crowdfunding project running on Kickstarter this week in order to get a first edition copy of this new board game.

"Burglar has been a lot of fun to work on." Said Matt Knott, illustrator and one of the Games consultants who has worked with Red Herring Games to help bring Burglar to life. "It delivers on all levels of family gameplay, kids LOVE to play this game and we've seen some competitive streaks from our adult playtesters too! I'm really proud and humbled by the confidence Jo and her team put in us to create such an awesome game. I can't wait to see the final product."

For those not familiar with Kickstarter – it's a pre-order platform which only takes money at the end of the crowdfunding process so long as the project reaches the minimum funding level target.

It's a safe way for small businesses to launch new projects. As they don't have to pay for manufacturing until they can guarantee they have enough sales to cover the manufacturing outlay.

With this project only having 8% to go until it reaches that point – it's a sure fire winner and one to watch!