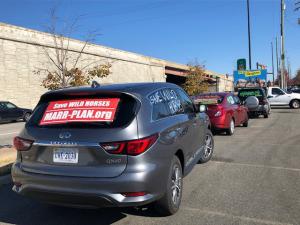 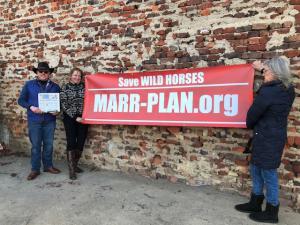 Image from the Marr Plan Motorcade 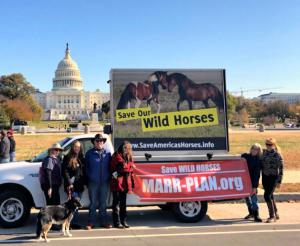 Marr Plan Advocates in front of the U.S. Capitol

WASHINGTON, DC, USA, November 18, 2019 /EINPresswire.com/ — WASHINGTON, D.C. – Saturday, wild horse protection advocates assembled in front of the U.S. Capitol on the National Mall to speak out against the terrible plan by The Humane Society of the United States (HSUS), ASPCA, National Cattleman’s Beef Association, and American Mustang Foundation that calls for the roundup of over 100,000 wild horses and burros from our federal lands.

Advocates from California, Florida, Massachusetts, Virginia, and the District of Columbia called out the troubling parts of the proposal, and offered an alternative – the Marr Plan, authored by activist Anthony Marr. Advocates then traveled by motorcade to Richmond, Virginia – approximately 100 miles. That’s the same distance as lining up all of the horses, head to tail, that the HSUS and ASPCA are proposing to round up and remove from our federal lands.

“We must save our iconic American wild horses and burros, and stop this madness,” said Cheryl Turner, campaign director for the Marr Plan Action Committee. “It’s a land grab by ranchers, and big oil, and the use of helicopters to roundup these majestic steeds is inhumane, and unacceptable. We must implement the brilliant and strategic Marr Plan instead.”

“America was built on the backs of horses – they’re an iconic symbol of western civilization that deserve better than to be rounded up and incarcerated by the BLM with cover from the Humane Society and ASPCA,” said Marty Irby, executive director at Animal Wellness Action, and a life-long horseman. “The Humane Society and ASPCA plan will cost the taxpayers billions, and the Marr Plan won’t – plain and simple.”

Despite its animal-friendly branding, the HSUS and ASPCA proposal asking taxpayers to finance inhumane mass roundups over a decade – adding tens of thousands of horses to the captive population that BLM manages at great expense. Their goal is to remove horses until the Bureau of Land Management (BLM) reaches its favored number of 27,000 – the number that existed in 1971 when Congress passed a law to protect these animals because they were “fast disappearing from the American scene.”

For inquiries please visit https://marr-plan.org or contact Cheryl Turner at 714-457-2958 or cherylallyturner@gmail.com.