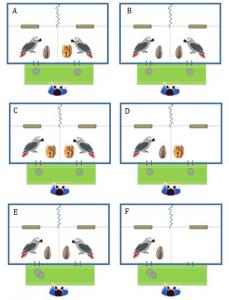 This is an important finding because inequity aversion, also termed “sense of fairness” has been considered an important mechanism in the evolution of cooperative behaviour”
— Dr. Anastasia Krasheninnikova, the lead author of this study

PUERTO DE LA CRUZ, SANTA CRUZ DE TENERIFE, SPAIN, November 11, 2019 /EINPresswire.com/ — Scientists from the Max-Planck-Institute for Ornithology, based at the Max-Planck Comparative Cognition Research station in the Loro Parque, Tenerife, found that four species of parrots did not show any negative reaction to their partner receiving a better pay-off than themselves from a human experimenter in exchange for tokens. Unlike most tested primate species so far, who so to speak “freak out” if their partner gets a better reward, the parrots reacted neither to their partner receiving something better for the same effort (i.e. to an unequal food distribution), nor to having to work harder for the same reward (thus to unequal effort).

The team around Dr. Auguste von Bayern trained parrots – owned by the Loro Parque Fundación in Tenerife- to trade in tokens for food. Then they conducted a study in which two parrots were placed in adjacent compartments and were requested to exchange tokens against food with an experimenter alternatingly. The parrots were tested in different conditions, in which the quality of the food reward as well as the effort they were required to invest varied. The scientists examined how the parrots reacted to an unequal food distribution or unequal effort, compared to equal treatment and found no difference. A control condition revealed that the parrots responded merely to better food being visible in their neighbour compartment, irrespective of whether another bird was present or not.

Dr. Anastasia Krasheninnikova, the lead author of this study, comments: “This is an important finding because inequity aversion, also termed “sense of fairness” has been considered an important mechanism in the evolution of cooperative behaviour. It enables individuals to detect when their partner cheats upon them, e.g. by not sharing food equally or by avoiding effort, and therefore allows them to decide when it pays off to switch to a new cooperation partner.”

Dr. Auguste von Bayern, the leader of the research team adds: “Our study adds to the very recent evidence, that inequity aversion is not a general prerequisite for the evolution of cooperation. It is a good strategy only for animals living in societies in which one can switch between cooperation partners easily, such as those of most primates. In contrast, it turns out that in long-term monogamous species that form pair bonds for life and show biparental care, such as parrots, there is a much higher tolerance of inequity. In such species individuals greatly depend on their functioning pair-bond and consequently, disrupting such a valuable bond in order to look for a fairer partner would simply be too costly.”

The study adds to the evidence that inequity aversion is not necessarily a pre-requisite for cooperation. In long-term monogamous species, quite contrarily, individuals are so dependent on their partner that they have not evolved to become jealous if their cooperation partner receive better payoffs.