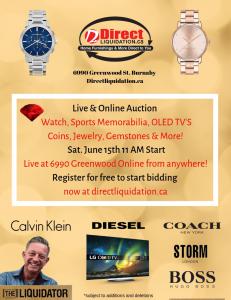 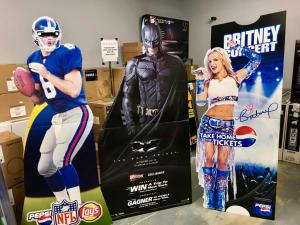 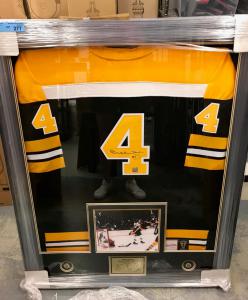 “What's awesome, is anyone in the world can participate, and most of the items are small and cheap to ship. It promises to be tons of fun for amateur buyers and collectors alike”.”
— Jeff Schwarz

BURNABY, BRITISH COLUMBIA, CANADA, June 12, 2019 /EINPresswire.com/ — From Hugo Boss to Kenneth Cole to Lacoste to Coach, hundreds of watches from all different brands being held in an online live auction at www.directliquidation.ca well as on-site at Direct Liquidation in Burnaby, BC on Saturday, 15th of June. “In addition to watches, jewellery, gems and TV's there are some super cool collectables such as a Gordie Howe and Arnold Palmer signed picture, retro pop-up ads and a Japanese military suit with boots to match!” says, Jeff, the Liquidator. “What's awesome, is anyone in the world can participate, and most of the items are small and cheap to ship. It promises to be tons of fun for amateur buyers and collectors alike”. “We have been doing auctions for years, and this one has to be one for the books” describes Tom Jones, who is helping to execute the auction.

Get a deal. Bid from the comfort of your own home and be apart of the action.

About the Auction
This online auction directliquidaton.ca & onsite auction will be held on Sat. June 15th. Bidders can bid anywhere in the world or attend onsite at Direct Liquidation 6990 Greenwood St. Burnaby. Registration is free. The bidders online and in-person can see the items going up for auction before it goes live. The auction time starts at 11 am sharp, and you can register at directliquidation.ca.

About Jeff, The Liquidator

Jeff Schwarz has been in business for more than 25 years buying and selling pretty much everything. From liquidating merchandise in the streets of India to buying furniture in Indonesia and doing deals in China, Dubai, Canada, the United States and Central America. Jeff has also had a successful TV show called The Liquidator that ran in over 100 countries with over 5 seasons of him doing business liquidating items and dealing with eccentric buyers and sellers.

Jeff Schwarz has been featured on:

– The Rush on Shaw TV

– An announcer at the Canada Reel Screen Awards & Leo Awards

– Plus Numerous Appearances in TV and Movie

Prison Break
Beyond 2
The Mission
Blood & Oil
Once Upon a Time
Travelers
Reaper
viii.When We Rise
Quantico
100’s of pilots