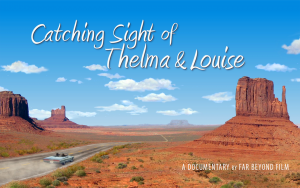 PORTLAND, OR, USA, October 26, 2017 /EINPresswire.com/ — As the #MeToo social media campaign fuels a global conversation about sexual abuse and the treatment of women, a new documentary is delving into the impact of another cultural watershed: the provocative 1991 feature Thelma & Louise, a film that centers on a sexual assault and its consequences.

Seattle-based filmmaker Jennifer Townsend will present her film, Catching Sight of Thelma & Louise at the 2017 Portland Film Festival on Friday, November 3rd, 4:15pm at the Laurelhurst Theatre, 2735 E. Burnside St. The documentary has won numerous awards including Best Documentary, Audience Award, Best Director, and Opening Night Film. Townsend will be available for Q&A after the screening.

When Thelma & Louise hit theaters twenty-six years ago, it was a lightning rod for controversy. Written by Callie Khouri, directed by Ridley Scott, and starring Geena Davis and Susan Sarandon, the movie became a rallying cry for women’s empowerment for some viewers. Others labeled it “male-bashing” and “toxic feminism.” Its treatment of sexual violence and a legal system stacked against women held the media’s attention for months, and still elicits strong opinions.

Catching Sight of Thelma & Louise sprung from the director’s own “profound” reaction to seeing the original film. Townsend wanted to gauge the response of other viewers around the country, so she created a national survey. Two decades later, she pulled out the survey letters and audiotapes, and began contacting people who had submitted them. “The voices in the box of letters were clamoring to be heard,” she says. “They would not give me any peace until their stories were released into the world.”

The filmmaker flew across the country to conduct on-camera interviews with two dozen survey participants — women and men — as well as two of the film’s male actors and its editor. The resulting documentary is a thought-provoking, often intimate look at the original movie’s impact and the truth of women’s lives.
Thelma & Louise left an indelible mark on the cultural landscape in 1991. But since then, the documentary asks, what has really changed for women?